I can’t believe it’s already March! Despite the crazy storm we had yesterday and the foot of snow we have outside, March is one of my favourite months.  It’s full of birthdays! Mine, my dad’s, my father-in-law’s, nephews, nieces, many friends…meaning lots of cake! 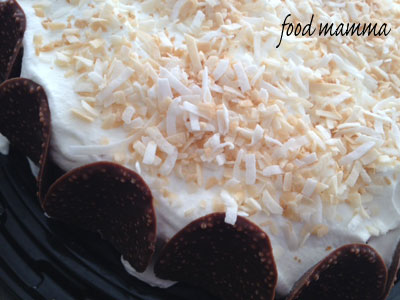 Last month, we had a delicious cake to celebrate my mother-in-law’s birthday. She requested Tres Leches but I decided to change it up a bit and make Coconut Tres Leches. The addition of the coconut just upped the flavour factor and made for an even tastier cake. Topped with toasted coconut, it was definitely a winner! 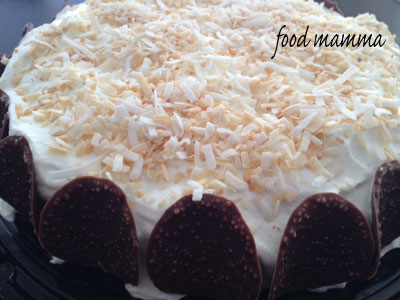 Heat the oven to 325°F and arrange a rack in the middle.

Separate the eggs, placing the yolks in the bowl of a stand mixer. Reserve the whites in a separate, very clean, medium bowl. Add the sugar to the yolks and, using the paddle attachment, beat on high speed until pale yellow, about 5 minutes. Transfer the mixture to a large bowl; set aside. Thoroughly clean and dry the stand mixer bowl. Place the egg whites in the clean bowl and, using the whisk attachment, whip on high speed until medium peaks form, about 1 1/2 minutes.

Using a rubber spatula, stir about a third of the egg whites into the yolk mixture to lighten it. Then gently fold in the remaining whites. Sprinkle the flour over the egg mixture and gently fold it in, just until there are no more white flour streaks. (Do not overmix.)

Pour the batter into the prepared baking dish and bake until the cake is puffed and golden and the edges pull away from the sides of the pan, about 20 to 25 minutes.

Meanwhile, place the three milks in a large bowl and whisk until combined; set aside.

Remove the cake from the oven and place on a wire cooling rack. Using a toothpick or wooden skewer, poke holes all over the cake and allow to cool for 15 minutes. Pour the milk mixture evenly over the cake and continue cooling, about 45 minutes more. Tightly cover with plastic wrap and refrigerate at least 4 hours or overnight.

When the cake is ready to serve, spread the coconut in an even layer in a large frying pan. Toast over medium heat, stirring often, until lightly browned and fragrant, about 5 minutes. 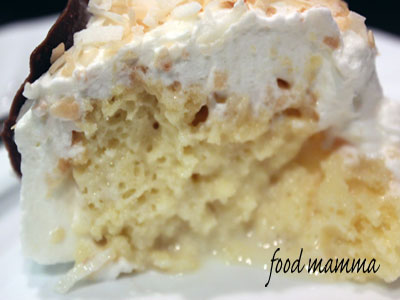