Fall is here! You can feel the chill in the air and see the leaves changing colour.  It really is a beautiful time of year. 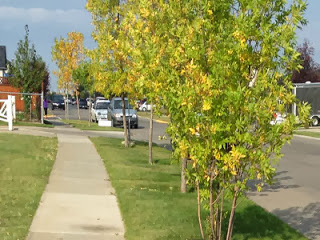 I’m still holding on to summer though, and thinking about how we took advantage of all the summer fruits in our meals. We tried to use them in as many things as possible.  Blueberries were used in one of my favourite recipes this summer – blueberry bbq sauce! 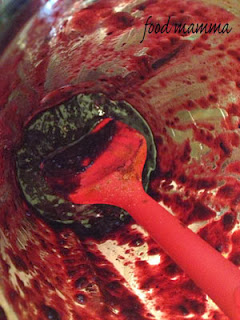 I think it was all the yummy BBQ I smelled but it was at the Stampede that I thought I wanted to incorporate blueberries into a bbq sauce. Hubby indulged me and we went right away to stock up on blueberries so that I could play in the kitchen. We also stocked up on ribs, thinking it may be a good vehicle for the sauce. 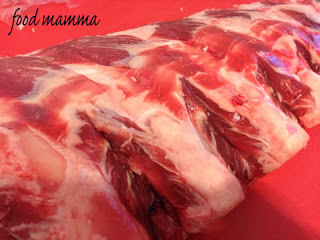 A little mix of sweet and savoury, this bbq sauce turned out better than I had imagined. It tasted really great in an ooey gooey grilled cheese sandwich. It went amazingly with the big beefy ribs that were cooked in the slow cooker until they were tender and then finished off on the grill. 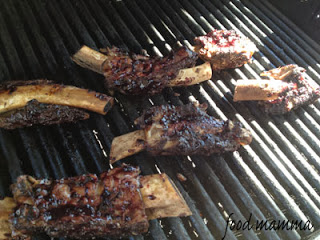 I froze some blueberries just so that I could enjoy this sauce later in the year. 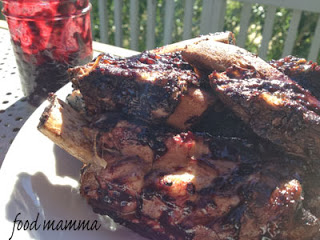 Heat olive oil in a pan
over medium heat. Cook the onions and garlic until softened.Add blueberries, sugar, vinegar, ketchup and spices and stir to combine. Simmer until the sauce is slightly reduced. Let cool slightly and and then puree in a blender. 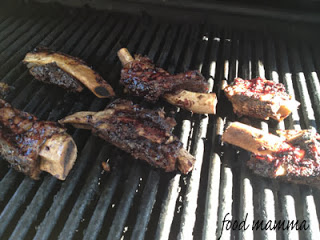 Cut a rack of beef ribs into pieces. Smother each rib with the bbq sauce and place in a slow cooker. Add enough water to cover the ribs and let them cook on low for eight hours until the meat is almost falling off the bones. Glaze each rib with more bbq sauce and cook on the grill until they are nicely charred and the sauce is caramelized.