Since we first tried mucho burrito, we have loved it. Put anything on nachos and q will just eat it up. 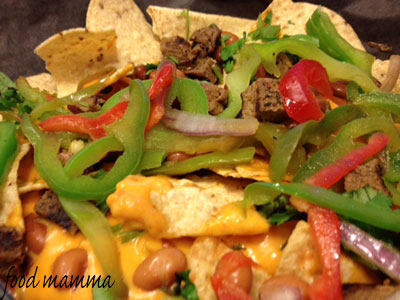 Last night, we decided to go in and try their ghost pepper burritos. Being the wimp that I am when it comes to spice, I probably should have skipped it. It’s a good thing I didn’t see this spice diagram before I ordered! 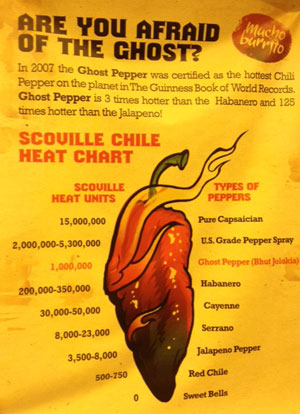 The ghost pepper burritos could be ordered two different ways – Hotter Than Hell and Wimpy. Wimpy didn’t sound so bad so I decided to give it a try. The red tortilla was smothered in a fig marmalade then topped with rice, veggies, salsa, beans and meat.  The Hotter Than Hell had the addition of a splash of pure ghost pepper sauce.  Yikes!  Both versions came with ghost pepper bacon which we didn’t get added on. 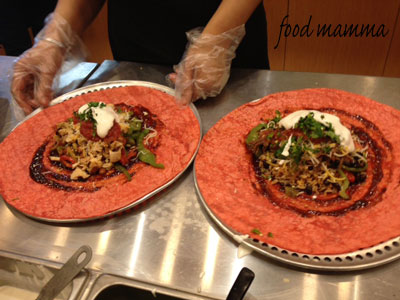 After one bite, my mouth was on fire!   It was so good though that I didn’t want to leave it.  The best part was the fig marmalade, and of course that’s where all the heat was coming from. The marmalade was infused with the ghost peppers. With extra sour cream, I was able to finish most of it. I know a few people who can take the heat, like my mom, would really love this. 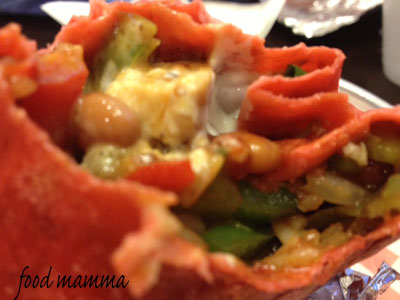 Anyone who loves some spice should try it out. There’s one week left to give it a try. Ghost pepper burritos are only here until Halloween.

Disclosure – Mucho Burrito’s PR Company sent me a gift card to try out the ghost pepper burritos. Opinions are my own.