Hubby and I celebrated our seven year anniversary on Monday! I feel like I was just reminiscing the other day about our honeymoon and that flashback has already been a year! Time really does fly.

Although we went for sushi with our little guy on the weekend, I wanted to make hubby something special.  My cousin had been talking about lobster mac and cheese a few weeks ago and I had been thinking about it ever since. Lobster definitely had to be in the picture, I just changed the cheese and pasta – cannelloni! 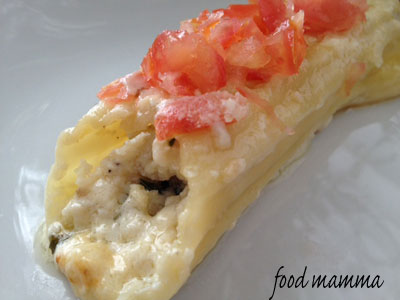 I filled the tubes with a flavourful mixture of ricotta cheese, sweet lobster and meaty prawns. Instead of using a bechamel, I opted for an alfredo sauce which covered the filled pasta shells and baked them in some bubbly cheesy goodness. 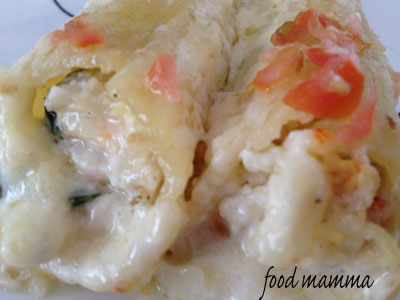 The richness was cut by the addition of some fresh tomatoes. The perfect indulgent meal to celebrate!

10 cannelloni shells, cooked as per package

Cook the onion and garlic in a bit of oil until softened.  Combine with the cheese, seafood and basil. Stuff this mixture into the cannelloni and place in an oven safe dish.

For the sauce, melt the butter in a saucepan.  Add cream and garlic and let simmer for a few minutes.  Add the cheese and a pinch of nutmeg and stir until the cheese has melted.

Pour the alfredo sauce over the filled cannelloni and bake in a 350 degree oven for 25 to 30 minutes until golden and bubbly. 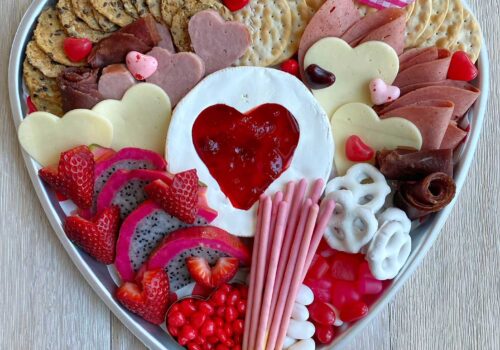