Happy New Year friends! We are already over a week in, how are those resolutions going? If you’re looking for a snack that you don’t need to feel guilty about, this is it. This chia and quinoa granola is my new favourite thing. 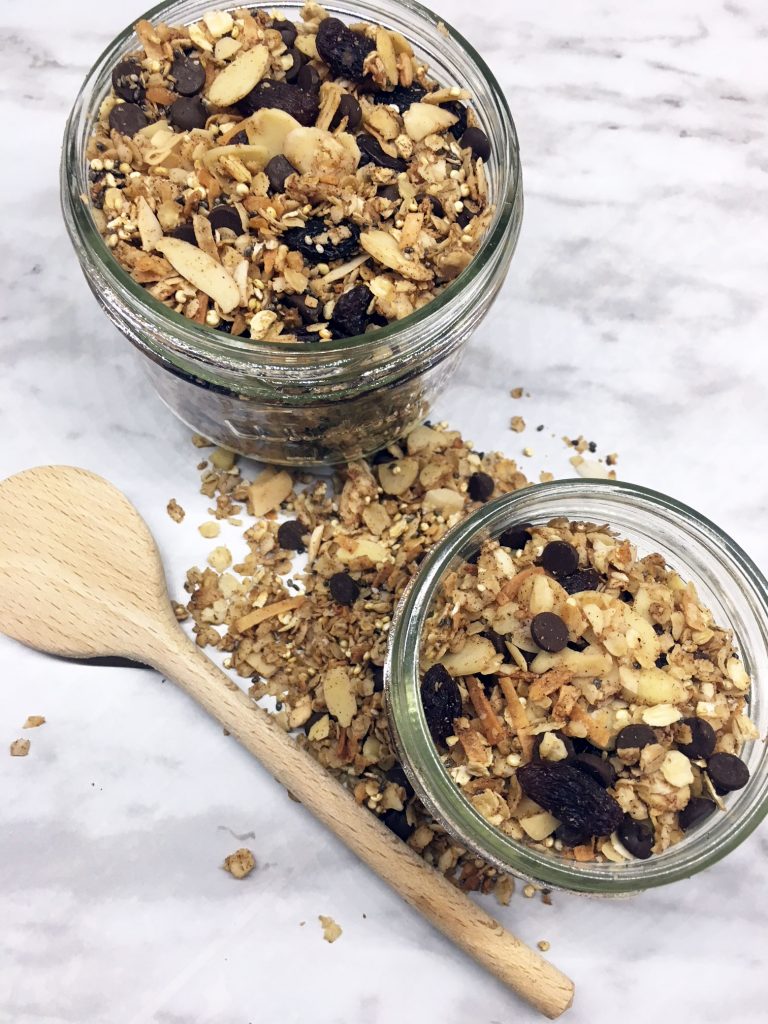 END_OF_DOCUMENT_TOKEN_TO_BE_REPLACED

It’s getting cold. As much as I want to hold on to summer, there’s no denying the chill in the air. Reports of snow on it’s way make me want to get cozy and enjoy comfort foods like steaming hot soup. 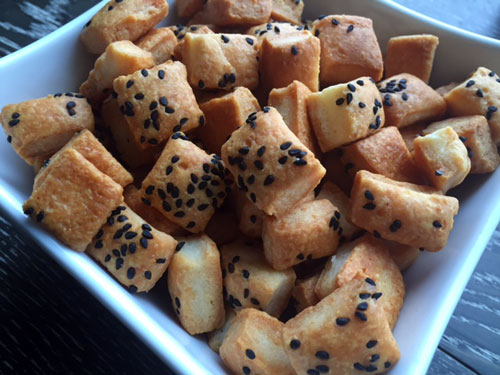 What goes great with soup? Crackers! Bowls of delicious broth topped with buttery cheddar crackers. Yes please! These crackers are topped with nigella seeds giving it an extra burst of flavour. Not only are these crackers super easy to make, they are great on soup, a nice addition to any charcuterie board and they make the perfect snack! 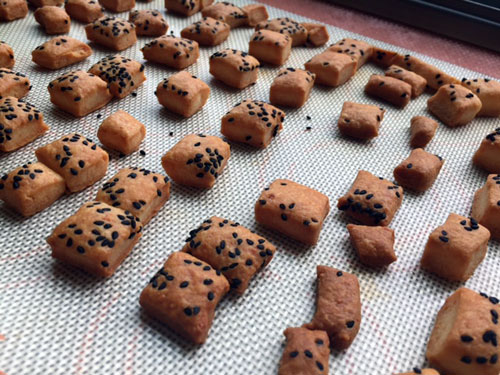 In a food processor, pulse the flour and the butter. Add the cheese and pulse again. Add the water one tablespoon at a time until the dough forms into a ball. Wrap the dough in plastic wrap and chill for half an hour. This will make the dough easy to roll. Roll the dough, sprinkle the nigella seeds and roll again. This will allow the seeds to stick right to the dough. Cut into squares, or use a cookie cutter for your desired shape. Bake at 350 degrees for 10-15 minutes.

Every couple of weeks, I always try and pick up a rotisserie chicken on my shopping trip. The rotisserie chickens are so versatile – you can eat them as is or use the chicken in so many ways. From sandwiches, to soups to stock, one chicken can go a long way!

One way to use the chicken is to make chicken salad. The creaminess of the mayo, the crunch of the green onions and that distinct kick from the Dijon make this the perfect lunch. Sandwiched between bread or scooped up with crackers, its a great way to use leftovers. 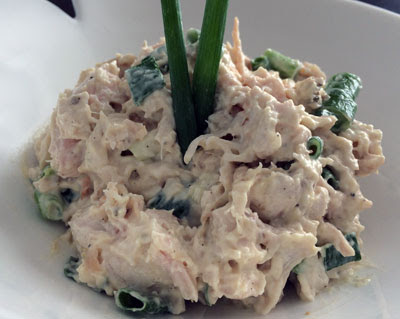 Sweet and simple – put everything into a bowl and mix.

School is in full swing and so is trying to figure out what to send for lunches and snacks. Things Q likes one week may not be a fave the next. Making sure I send things that he will actually eat and not stay hungry can be a struggle. 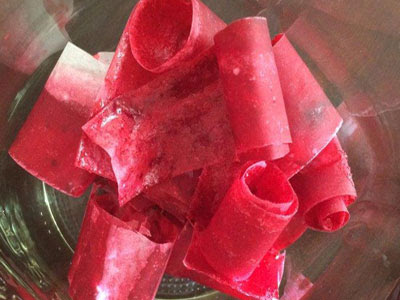 I was so happy I found this recipe for homemade fruit roll-ups. You can use whatever fruit is seasonal or the favourite that week and unlike the store variety, you know exactly what is going in them. These are super easy to make and always a hit! 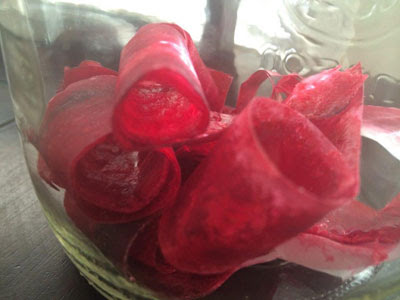 In a food processor or blender, puree your fruit, sugar and lemon juice.

Cook in a saucepan over medium heat until thick, 20-30 minutes. Strain through a fine sieve onto a baking sheet lined with parchment or Silpat. Shake the pan to level.

Bake at 170 degrees until dehydrated, about 3 hours (puree should be just slightly sticky but not dry). Let cool for 10 minutes.

If you lined your baking sheet with parchment you can cut the dried fruit into desired shapes. If you used a Silpat, place a sheet of parchment (cut to the size of your baking sheet) on your work surface. Carefully invert the fruit and Silpat onto the parchment and peel the Silpat away.

Cut into eight rectangles, or about 13 crosswise “strips”. Roll up with the parchment and tie with twine or baker’s string. Store at room temperature for up to 1 month.

We love Halloween around here! It’s a fun time of the month and it’s a day we all look forward to. We spent some time on the weekend carving our pumpkin. Q was reluctant to get his hands dirty but once we started pulling out the pumpkin guts, he had fun. The best part of pumpkin carving is of course the seeds! Roasted and salted, they are perfect for munching on. 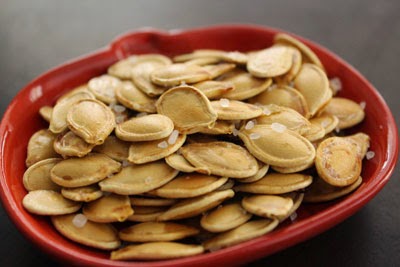 There are so many variations on how people roast the seeds. This is how we do them at our house. 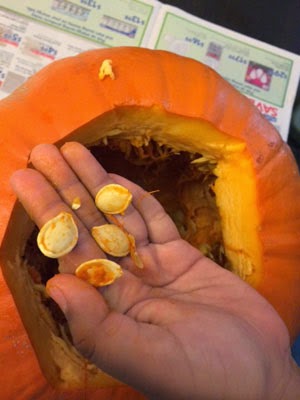 Once you pull out the seeds from the pumpkin, rinse them so that you get all the pumpkin off. I usually do this in a colander. 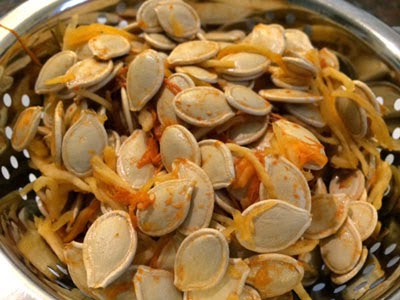 Once washed, place the seeds between paper towels, getting them as dry as you can. 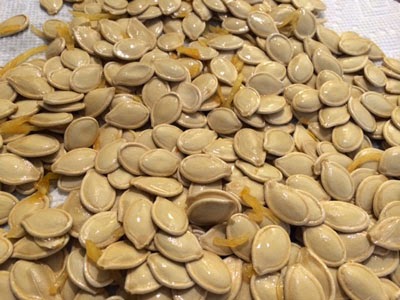 Put the seeds on a baking sheet and drizzle with olive oil. Bake at 350 degrees F for about 20 to 30 minutes. Take them seeds out when they get a little toasty and brown. Salt and enjoy! 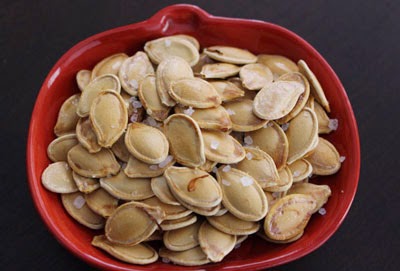 Hubby and I escaped last month for a weekend at the Fairmont Banff Springs. It was a much needed break and the perfect place to sneak off to for a couple days. 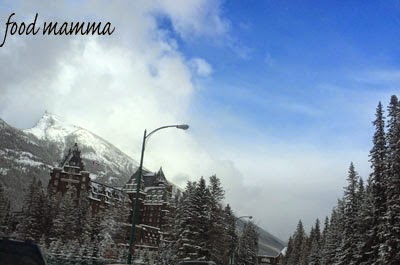 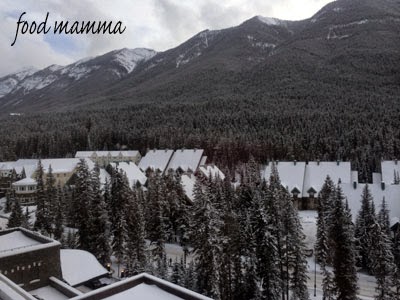 Willow Stream Spa was amazing!  From the waterfall treatment whirlpools and mineral pool to the  relaxing massage, everything was perfect.  With our package, we had access to the spa for two days which was a real treat. In the co-ed resting lounge, we sipped on flavoured water and snacked on housemade granola bars.

These granola bars were fantastic! They were chewy and packed with nuts, seeds and coconut. Even after we came home, I kept thinking about these morsels of goodness. 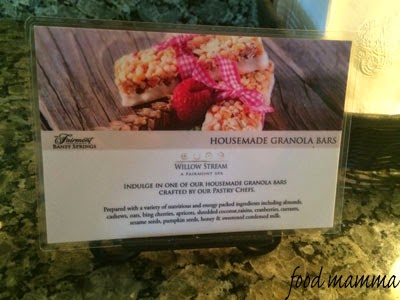 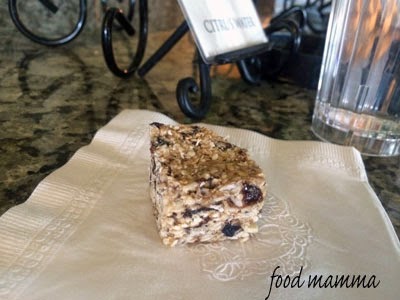 The Fairmont graciously gave me the recipe. It was clear why these were so delicious – condensed milk! When I made the bars last week, I divided the recipe by 4. I knew it was a hit for Q when he kept sneaking some from the kitchen when he thought no one was looking! 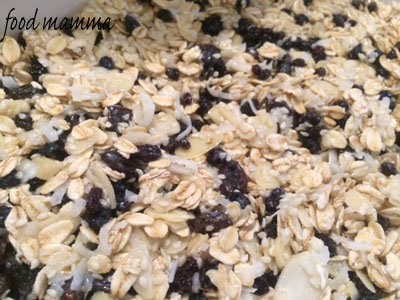 Combine all the ingredients together. Mix until combined and holding together. Press down firmly in a sheet pan and roll with a rolling pin to pack; the pan should be smooth. Bake at 175 degrees Celsius for 12 to 16 minutes. 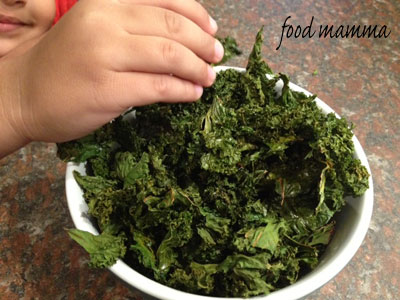 It’s exactly two months until my sister gets married!  We are super excited for her big day so she can marry the love of her life.

A huge part of an Indian wedding is the food.  With lots of people traveling for the wedding, it’s nice to have snacks around, like chevdo.  Chevdo is an indian snack mix, mostly filled with fried lentils and peanuts.  With my sister’s allergies, this is something she has had to stay away from.

I was intrigued when I saw Aarti Sequeira’s recipe for chevdo that had no chickpeas.  The peanuts were easily replaced and it made for a dish that my sister can actually enjoy.  I knew I had to give this recipe a try.  I made an addition of coriander seeds, which added a lemony taste to the mix.  I still had some Christmas Rice Krisipies left which added some fun colour with flecks of red and green.

Looking forward to my sister’s return so that she can finally try some chevdo. 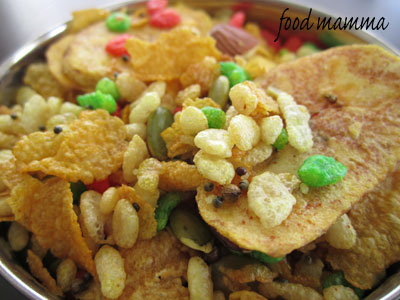 In a large pan over medium heat, toast the cereals, pumpkin seeds and almonds for about 2 minutes.  Remove from the pan.

Warm the oil in the same pan over medium heat.  Add the mustard seeds, coriander seeds, curry leaves and turmeric.  Cook for 30 seconds and remove from the heat.

Add the cereal mixture and plantain chips.  Season with salt and toss until combined.

On the search for a healthy snack, I thought granola would be the perfect thing.  With all the nuts and seeds, I figured it would be yummy to munch on, while providing energy for us and the little guy throughout the day.  When searching for recipes, however, I realized that many were full of large quantities of oil.

I was excited when I found Ellie Krieger’s Nutty Granola recipe because it had no oil!  Just some good old maple syrup and some cinnamon were used to create this delicious snack.  I added some seeds and coconut to the mix and was able to put it in the oven in minutes.  Q loved the granola and happily picked through it naming all the nuts and seeds.  A fun protein-packed snack for a toddler (and his mamma). 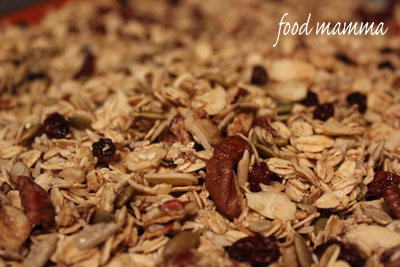 In a medium bowl combine the oats, nuts, seeds, raisins with the maple syrup, salt and cinnamon. Spread the mixture onto a greased baking sheet and bake until golden brown, stirring occasionally, about 30 minutes.

After reading about it on blogs, twitter and even watching it on television, I had to see what all the fuss was about.  People seemed to be raving about kale chips. I couldn’t understand how so many could get excited about greens.  Well, I understand it now!  I made a batch last week and hubby and I polished it off in minutes.  I made a couple more batches on the weekend for family and everyone loved it.  The tough greens when tossed in oil and seasoning and baked turn into paper-thin morsels that just melt in your mouth.  Check out recipes on the following blogs: Backseat Gourmet, Dinner with Julie, Gluten Free Girl as well as Giada’s recipe on Food Network.  Great served with Basil Mayo (mayo, basil, 1 clove garlic, lemon juice, salt, pepper). 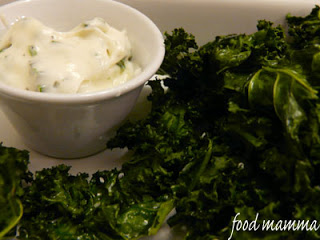